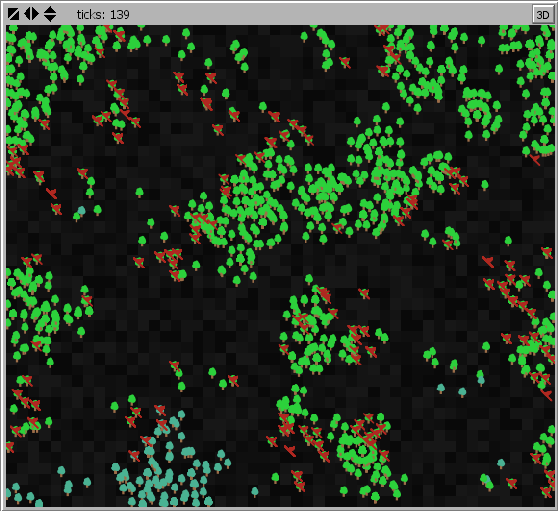 This individual-based computer model attempts to simulate some of the hypothesized dynamics driving synchronized fruit masting in Bornean dipterocarp trees. This remarkable biological phenomenon, called by some “the heartbeat of Borneo”, has been studied by Janzen, Curran, Cannon and other for many years. Their research has hypothesized and gathered evidence for a fascinating network of interactions between multiple tree species and their seed predators, such as birds and wild boars, all apparently triggered in some way by ENSO events.

Agent-based models (ABM) provide an arena in which to extend proposed conceptual mechanisms into a logically defined simulation space, providing an opportunity to test the hypothetical implications, strengths and limitations of those mechanisms. ABM are in effect a sort of highly rigorous thought experiment. Inspired by the Curran et al’s fascinating research, I wanted to see if an ABM model of the individual-to-individual interactions they proposed would readily yield the system-level phenomenon they described. I also wanted to use the model as a conceptual petri dish to ask some questions such as: how important is the degree of fruiting synchrony to the final populations of different species?

The applet is java-based and may a minute to load.

To run the code version, install a copy of NetLogo on your computer, run it and open the borneo.mar15.nlogo file you downloaded from the above link.

Synchronization of reproductive events has long been observed across many species of dipterocarp trees in South East Asia [e.g. Janzen, 1974]. These reproductive events are discrete and infrequent. Their timing has been informally associated with El Niño-Southern Oscillation (ENSO) events. Community-wide participation in a shared demographic process is unusual, and it has been proposed that the selective mechanism driving this synchrony is a form of seed predator satiation. According to this hypothesis, synchronized, infrequent “fruit masts” benefit the fruit producers by limiting frutivore populations in between masts, and satiating the reduced populations during the mast. In this way more fruit escapes predation and yields greater recruitment, averaged over time, than would be possibly given unsynchronized fruit production [Janzen, 1976, Curran and Leighton, 2000]. Fruit-eating vertebrates have been observed to respond to fruit masts by large-scale migration and feeding. This spatially-extended, multi-trophic cascade has been described as “the heartbeat of Borneo” [Lansing, 2006] .

Subsequent work by Lisa Curran and colleagues has established a more robust empirical basis to assess these hypotheses, specifically with regard to the species present in Gunung Palung National Park, West Kalimantan Province, Indonesian Borneo. Curran and colleagues made direct field observations of over 2000 individual dipterocarps spread across 7 environmental zones for 68 months [Cannon et al., 2007]. Their data conclusively demonstrated that the supraannual fruit masts are statistically correlated with ENSO climate events [Curran et al., 1999]. They also generated substantial supportive data for the predator satiation hypothesis, and made refined conclusions regarding the spatial and temporal interactions of the fruiting trees and their seed predators.

The model’s behavior has not been formally characterized, and the questions posed have not been answered (although in some cases there are suggestive initial results). What follows are some typical scenarios which have been informally observed.

By setting the cue strengths carefully, it is possible to meaningfully compare the effects of pulsed and unpulsed cues on the tree populations. First the model is run in pulsed mode, with a given frequency of pulses. The model can be re-run as many times as necessary to characterize the behavior. Then, the model can be set to run unpulsed, with the cue strength set to 1/(the pulsed cue frequency). I.e., to compare the results of unpulsed cues with cues pulsed every 10 time steps, the unpulsed cue strength is set to 0.1. In this way, the total amount of reproductive potential is held constant between the pulsed and unpulsed runs (recall that at each pulse, the reproductive chance is 1, plus or minus some noise).

The results of these comparative tests are clear: for a given parametrization, tree populations will nearly always be much more successful when cues are pulsed. For a quick and convincing test of this, try switching on pulsed cues mid-run, without adjusting any other parameters.

When cues are pulsed, the tree populations will typically climb to a periodic steady state and remain stable across a wide range of demographic parametrization. Parrot populations are typically less stable under this scenario, and susbstantially lower.

When cues are unpulsed, frutivores will initially dominate, and extirpate the trees from center of the world. Once the only remaining trees are those on edge patches, the population of frutivores will decline, and then remain relatively steady at lower levels. Typically the parrots will move as a pack, serially among the spatially segregated patches. In this way, each patch has a chance to recover somewhat in between feeding sessions. Particularly when there is more than two patches established early, this dynamic can persist for many generations.

The computation requirements of high tree populations have precluded much investigation into this phenomenon, but it appears that when cues are decoupled temporally, the two tree species will also segregate spatially. This must be a result of feeding movement, but beyond that a unequivocal mechanism is not immediately obvious. This is a particularly interesting phenomenon worth further investigation.